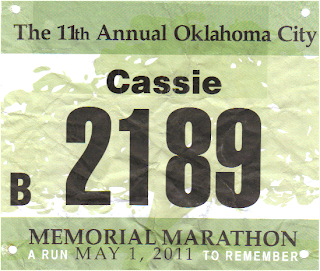 Enduring through my first marathon did not just occur yesterday. The process started 16 weeks ago when I started my first day of training. The 16 grueling, conflicting inner feelings, suffering, happiness and accomplishment lead up to this past week. Last week I began to get nervous, run numbers through my head and have dreams about the race. The school was getting excited as well. A student drew me a picture. The students were asking more questions. I received good luck emails and received a card signed from all my coworkers. 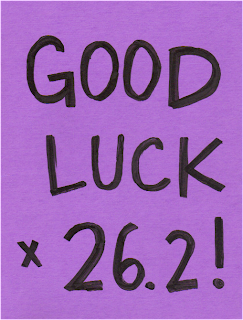 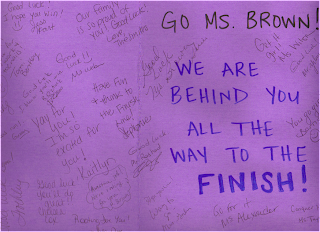 When it came to Thursday and Friday I began to get really nervous. My stomach turned for two days straight. I kept thinking to myself, "If I am this nervous now how am I going to be on race morning!?" Friday afternoon I received the card from my coworkers and people where stopping by my room to cheer me on and wishing me luck before they left. Later that evening when I was sitting in my car waiting I pulled out the card and read every little hand written note on there again. "Go for it!" "You'll do great!" "I'm so exited for you!" "Way to go!" "Get it girl!" "Conquer it!" and so on. I took in each phrase as if a best friend had written each one. Feeling as if each person truly cared. At that moment I took a deep breath and simply placed the card back into my bag. It was suddenly a feeling of peace. I knew that I could conquer the goal that I had set out before myself.

Saturday came around. It was time to pick up my packet and go to dinner with fellow racing friends. I began feeling sick after dinner and I told myself it was only nerves. We all sat around throwing race information around, discussed plans and talked up some numbers. Getting to bed early was accomplished although I layed there for about two hours. I woke up at 4:30am ready to go even though my alarm was set for 4:45. Not only do you have to run for four hours for a marathon, but you have to wake up at the crack of dawn!

When I awoke I felt good. No nervous stomach, not even anxious. We check the weather which is calling for rain shortly after the start of the race, however it should be in the 50's. I opt to wear my tank top and shorts still, but figure I'll be fine. I mean it was only scattered rain showers. Its nice to run in scattered rain showers occasionally. We head to the location of the race and it begins to rain. Before we arrive it is announced that the race will be postponed by 30 minutes due to lightning! We hop out of the car with our trash bags in hand and retreat to a parking garage near the starting line. (Trash bags are used to keep you dry and warm at the starting line. Then you take them off later and throw them to the side so you don't have to worry about taking layers of clothes off. )

People began to get discouraged as it was pouring rain and the sunrise was no where in sight. All I knew was I trained 16 weeks for this day and if they canceled the race it would screw things up. I wanted to get to running my first marathon! But the dedicated runners headed to the start line. I arrived to the packed starting line with four minutes to spare. The four minutes passed as if it was four seconds. One minute after the gun went off I crossed over the starting line which officially started what would be the longest run of my life!

The first three miles consisted of getting spread out among the other 17,000 participants, trying to avoid massive puddles and getting use to the bitter cold wind and rain. The wind was pretty strong. From watching the weather earlier I knew the wind would be against me on the way out which would be much better since I was fresh and it would be against me on my way back when I was the weakest. Therefore, I knew all would be okay. I kept in mind what Ryan had told me, "Just find someone to run behind." I would fall in behind people when I could. During mile two I realize I can no longer feel my hands or arms. I look at my arms. All of my arms and hands where beat red. The only part that was normal flesh color was in the crease of my elbow which had not been exposed to the wind. Quickly I start thinking. I knew I had a long sleeve shirt in the car along with gloves. At this point I still had the trash bag on to keep me dry so I didn't want to fight to get a shirt on. However, if I just had gloves it would help keep the heat from escaping from my hands. At mile 3 Ryan stood at our first meeting place. I ask him to bring me my gloves at the next stop and told him that I am one minute behind the gun time.

Ryan had a plan to meet me at several locations along the way to be my cheerleader and my personal aid. What a great guy! I knew the next stop was mile seven. That meant I would have to endure through 4 more miles of the piercing wind and rain before I could have my gloves. I shortly began to get use to the numbing sensation although I wondered if I would get hypothermia.

At mile 6 I was suppose to take a GU, yet I didn't realize I passed mile 6 until about half a mile past it! I knew I have to keep my nutrition in me so I keep looking ahead for a water stop. I hear someone yelling "water!" I go to grab the tube of GU that is safety pinned to my shorts. I can't move my fingers! I can't get them to close tight enough around the GU! Finally after several attempts the GU is in my hand and at eye level. Luckily, I take a look at it before shoving it in my mouth! The GU was unopened and the safety pin was still attached pointing at my face. In theory the safety pin stays on your shirts with the opening tab and your GU is good to go. I now am trying to use the other hand, whose fingers are not moving, to open it. I get it open just in time to take a gulp and approach what I assumed was a water stop. I quickly realized it was not an official water stop. It was a private set up where they had little bathroom size cups of water. (I must add in here: Thank you to all the volunteers! Its just not what I was expecting!) Let me also say, if you have ever had GU you know what I am talking about, half a bathroom size cup of water is not nearly enough water to down GU! Shortly there after I approach Ryan at about mile 7 where he has my gloves. He runs along side me as I try to put them on. Again my hands are not working well so putting on the gloves is a challenge. Not only is it a challenge, but it is very painful! As the material drug over my hands it was as if someone was pushing a thousand needles into my hand repeatedly with a added burning sensation. A few strides later my hands and arms began to feel warmer! Ryan was a life saver for bringing me the gloves!

From mile 7 to 13 I don't really remember much. I know that Ryan met up again with me at around mile 11, but that is about it. I was watching the time when I came to each mile marker to make sure my pace was consistent. I fell in behind someone if the wind began to blow. I payed close attention to my body to decide if I needed water or Gatorade at each stop. I began to feel like a pro: I would come to the water stop, grab a Gatorade in just the way where you can collapse the cup so it only goes in you mouth rather then your nose. Then, just in time I'd rotate that cup over to the right hand to grab a water or even two. All while still running. I felt like I had done this a million times. I think this may have been the first race I actually didn't get water up my nose!

As you can see I am only at mile 13 at this point. I still have 13 more miles to write about along with the following day, but I am going to stop for now as I need to catch up on some rest. Check back tomorrow evening for the rest of the story!
Posted by Cassie at 5:59 PM