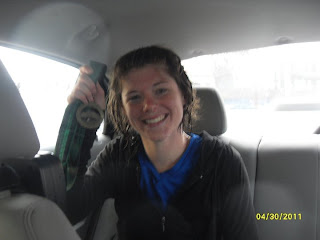 I come around a corner and down a hill to see Hefner Lake. For some reason I had a big feeling of relief. At that moment I thought it was because I was looking forward to the change of scenery. However, I soon realized it was because I visualized the course map in my head and realized it was actually the half way point! I could then see the 14 mile marker when the wind began to pick up. I keep putting one foot in front of the other to make it to the turn around. All I had to do is make it to the turn around and the wind would be against my back. The things you look forward to as you run a marathon!
I turn the corner and I begin to feel my glutes getting tight. I think to myself, "It is too early for this." By now the arch in my left foot had already been hurting for several miles. I make my way towards the water stop provided by the OKC airport where they are offering peanuts. After chuckling to myself I pass them by. What seems like moments later my legs are becoming tingly and numb from the wind coming from the back side. My thought then goes to, "Well at least I can't feel my glutes anymore!....Too bad the freezing puddle in my shoe hasn't numbed my foot!"
From mile 14 to 22 again I don't remember much. I knew my legs were starting to get tired, but not awful feeling. I remember Ryan saying that if my legs start feeling bad to get an orange. I look for oranges at a few stops, but none to be found. I resort to bananas. I know I had seen bananas. The next two stops had no bananas. I finally get a banana and swish it down with water. I must say that banana water isn't that tasty.

Pictures and the students' perspective on the whole thing coming soon!
Posted by Cassie at 2:29 PM